The Chance of Success Total ("COST")​

COACHING IN THE NFL BLOG 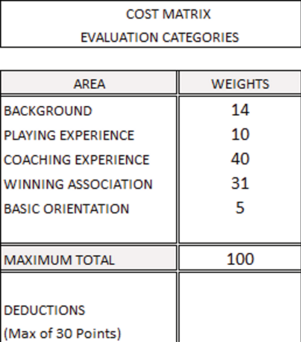 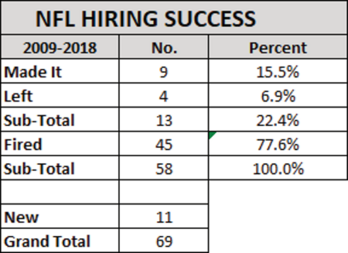 Employers never hire a new employee expecting him/her to fail. Hope springs eternal that the newest employee will be an all-star. Unfortunately, when owners bring in new head coaches, most often the opposite is true, and the new guy is lucky if he survives three or four seasons. In fact, there is no way to be sure your new hot shot is going to work out, but by taking a look at what has gone before, it is possible to hedge the bet some.

It is our contention that by comparing a new candidate’s credentials with what has worked before, you can get an inkling about how he is going to work out. By analyzing the qualities and backgrounds of the most successful of over 300 previous NFL head coaches, we created a standard model for the “perfect pro football coach”. We then developed our “Success Probability Gradient (SPG)”, which has been more recently modified as our CHANCE OF SUCCESS TOTAL ("COST").which enables us to compare a new prospect against the “perfect” model. The higher correlation that your new man has with the past standard bearers, the more likely he will be successful in his new position with your team. We place a lot of emphasis on experience as a coordinator and having been consistently around winning programs. We have also discovered some quicksand pits to avoid.

It is not the objective herein to demean or find fault with the hiring process incorporated by any particular team or teams. The fact of the matter, however, is that as a group over the past decade NFL teams have performed very poorly, when it comes to finding good replacements. Our research also confirms, what is very obvious: the better teams have the least turnover. Turnover of head coaches definitely hurts winning. We ran an analysis of all the head coaches hired from 2009-2018, exclusive of mid-season replacements, and then compared the actual hires against what our COST forecasts would have reccomended.Here is a summary:

​During the ten years of the study period, NFL teams hired 69 new head coaches. If we exclude the most recent hires, who had not had a chance yet, there were  59 coaches to consider. Of those 45 were fired outright and 4 left on their own (?) Only 9 can be considered as having made it and a "successful hire. NFL batting average:  15.5%.

Of those same 49 hires, had our COST recommendations been followed, we would have been correct in 37 instances (either hire or not hire). COST batting average:  63.8%

Our COST matrix considers a prospective new coach's credentials in five broad categories which have been given weights as to significance. A perfect score COST score would be “100”, and that guy would be the next Bill, John, or Vince. Here are the general categories evaluated.

​
To add a little meat on the skeleton, let's look at an actual NFL hiring class. I selected 2012 at random. The following chart sets forth what has happened to those seven coaches who were hired that year.

This group turned out to be perhaps the worst of all, with a less than three-year average life on the job, as supported by a 40.3 percent winning percentage. I did think Romeo and Dennis Allen probably had what it took, but was wrong. Chuck Pagano was certainly a standout here. We hit on 6 and missed on 3 (67%). The teams were 0 for 9 (0.0%)